Kids Interviews on Completion of Abacus Maths All the levels Before we start telling our experience about abacus we would like to pen down few things about us. We are just like any ordinary kids who always enjoy Indoor/outdoor activities (i.e. cycling, swimming, badminton are few of our favourites) but gave little time to study. During our study time, our parents have observed our enthusiasm in maths and thought to improve our skills, speed and accuracy in whatever we do. They then joined us in Abacus classes. It was 2 1/2 years ago, we were 9 & 8 years old kids when our journey took to a new way of studying in maths.

Making a mark in the world of technology, coding and computer science wasn’t easy for Dr Rashmi Mantri, educator, director and founder of UK-based Edtech company BYITC (British Youth International College). Rashmi, a PhD-holder in computer science is another example of how it is to be a woman entrepreneur and a mother in the world of technology and computer gig. For most of her life, she has worked as an educator at various IT corporations and universities in Scotland teaching young kids to adults. However, it was not until one sudden day when Rashmi, asked her son, Dhruv, a simple math question and he wasn’t able to solve it at level Primary 5. The segment was called Human Calculators and Dawn French was absolutely blown away by their skills. The legendary comedian wasn’t the only one as commentators on social media were equally mesmerized by the skills of the students.

Dr Rashmi Mantri, founder of the British Youth IT College, was invited on to STV 2’s “Live at Five” segment to tell the story behind running the SuperMaths classes and the success her son has encountered in maths since being introduced to the abacus. Live at Five is a Scottish topical entertainment programme which covers the latest in Scotland’s cultural scene.The segment was called Human Calculators and Dawn French was absolutely blown away by their skills. The legendary comedian wasn’t the only one as commentators on social media were equally mesmerized by the skills of the students.

The trick to their magic? 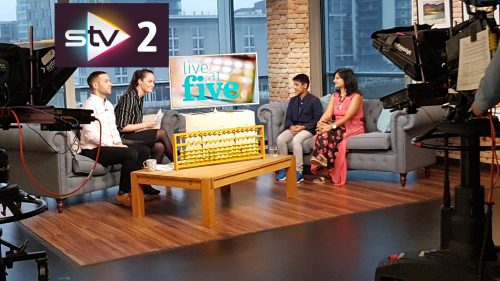 Coding is the new alphabet … but are your kids prepared?

The following is from an article titled “Coding is the new alphabet … but are your kids prepared?” published in the Herald Scotland by Karin Goodwin.

SCHOOLS need to prioritise teaching children how to write computer code according to leading academics who fear Scottish pupils could find themselves left behind unless they learn digital skills essential for success in the modern world.

Despite positive moves that have seen the introduction of digital skills on the Scottish curriculum from a young age in the last year, experts say action needs to be taken to ensure that there are enough teachers available to deliver essential technology lessons such as coding. Others argue “patchy” provision of school technology needs addressed with girls, in particular, provided with additional support and encouragement to break down the worrying gender imbalance in technology subjects.

The following is from an article titled “I turned my child into a math whizz and now you can too” published in the Scottish Mail on Sunday by Kirsten Johnson.
WHEN Dr Rashmi Mantri discovered her nine-year-old son was struggling with simple sums, she decided to go back to basics.

Using an ancient technique she learned while growing up in India, she tutored Dhruv after school – with the help of an abacus.

Within weeks he had been transformed into a maths whizz and his classmates’ parents began to get in touch to ask for help.

Now Dr Mantri, a former university lecturer, is taking her abacus tutoring to the masses after becoming disillusioned by the Scottish primary school curriculum. Hundreds of children attend her weekly Supermaths sessions in Glasgow’s West End and South Side, while her first Edinburgh class was launched last week.

CISCO KID Dhruv is on Top Of The Digital World

At 13, Dhruv became the youngest person in the world to qualify as a cyber ops Cisco Certified Network Associate. It’s an exciting achievement and all the more remarkable when you consider that not so long ago he was struggling to do simple sum in his head.

The term “Cyber Ops” probably has the most of us thinking of dark arts beyond the worldwide web with hackers shifting million of pounds at the click of a mouse and comprising the security of everything around the world from oil firms to military forces.

But Dhruv, now 14, a student of British Youth IT College run by his mum, Dr Rashmi Mantri, laughs off any suggestion that cyber ops is all about super criminals.

Year of Young People: How an ancient tool turned me into a maths whizz

I WAS inspired to learn coding at a young age because computers are the future. We are already depending a lot on technology, web apps, mobile apps and software day-to-day. I used to think about the code behind these software applications is, and I used to dream about the programming.

Every time I played a game, I came to my mum asking her questions: “How is this made?” “How does this work?”, ”Why is it that these move on their own?” “Can we edit or delete the code and change the functionality of the software?”

Dr Rashmi Mantri, founder of Supermaths, was invited to speak with Kaye Adams on her BBC Radio show “The Kaye Adams Show”.

“Should we ban the calculator from Scottish classrooms? Dr Rashmi Mantri from Glasgow said she felt a sense of shame when her son couldn’t do simple sums at 8 years. She taught him the Asian abacus and went on to set up Glasgow’s British Youth IT College offering abacus classes to young people.”

We are excited to announce that Dr Rashmi Mantri and some of the Supermaths kids will be interviewed tomorrow morning on Awaz FM’s popular program AAjkal with Manjulika. Rashmi, along with pupils Zahra, Shona, Abu, Divena and Vidhi, will take part in the Awaz FM interview with presenter Manjulika about the benefits of learning abacus and the kids’ experiences of studying the abacus method. Tune in to Awaz FM on 107.2 FM from 11am – 12pm to hear the interview live on air.

The Awaz FM interview will cover various areas of abacus maths and the Supermaths programme, as well as discussing our upcoming summer boot camp which you can read more about here. Dr Rashmi Mantri will be discussing some of the latest developments in Supermaths.